I’d always wondered about the actual off-road capability of Jeep’s crossover lineup. Commercials show them bombing down dirt roads, climbing rocky embankments and plowing through streams just like their solid-axle, body-on-frame big brother, the Wrangler. But can a unibody SUV really be that much more capable than the car-based hatchbacks and station wagons from which it’s descended?

At this year’s 2018 Moab Easter Jeep Safari, I was lucky enough to test drive the refreshed 2019 Cherokee Trailhawk on the trails of Moab to find out — and the results were quite surprising. 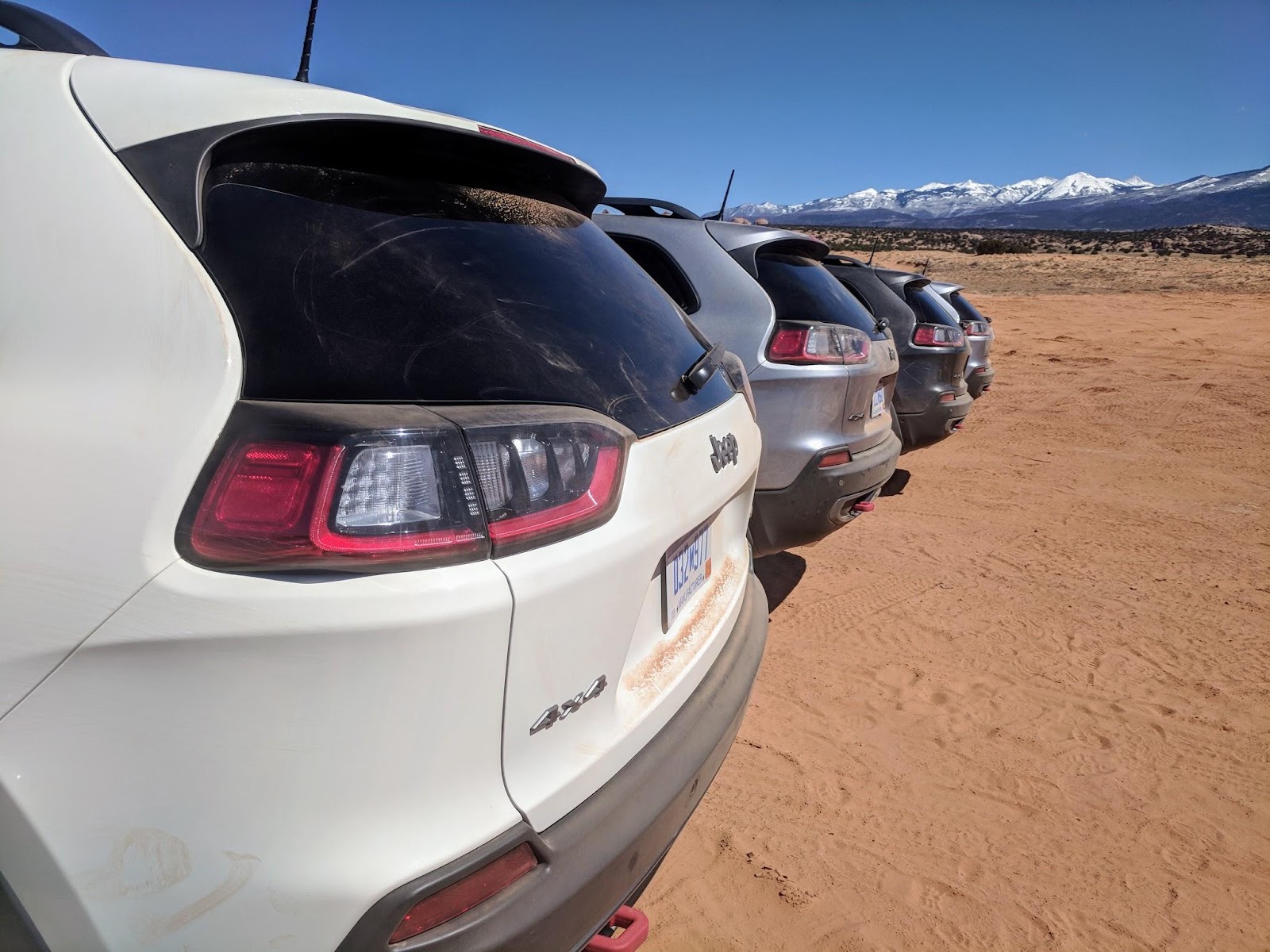 Going in, my skepticism was compounded by the fact that earlier that morning I had driven the new Wrangler along a rock-crawling course that culminated with a white-knuckle ascent up a 41-degree slab of slick rock. Stepping out of the Wrangler and into the Cherokee, I wasn’t sure what to expect, but I figured it would be closer to a Sunday drive than to what we had just experienced in the Wrangler.

As it would turn out, I walked away surprised: The Jeep Cherokee Trailhawk can actually handle a lot.

Led by a guide driving a lifted 2018 Wrangler on 40-inch tires, our drive set out along a trail that seemed pretty tame early on. Then we came up to the first challenge — a rocky, step-like incline. Needless to say, I was a little surprised that the Jeep PR team had chosen this route. Via a walkie-talkie in each vehicle’s cupholder, the guide instructed us to engage 4-wheel-low and turn the Selec-Terrain dial to ‘Rock.’ When it was my turn, I approached the first rock facing with the help of a spotter, and I eased onto the gas pedal in order to climb the ledge. I was met with an uncomfortable creaking sound from underneath the vehicle — and as soon as the tires started to spin, I let of the gas and rolled back off of the ledge.

Here’s where I learned something about terrain selection systems: you’ve got to give the computer time to figure things out.

With the guide’s encouragement, I re-tried the obstacle, and sure enough, after a bit of commotion, the vehicle’s computer figured out exactly how much power to send to each wheel, and all of a sudden the Cherokee pulled itself up the hill. It was remarkable, and it gave me a new appreciation for modern off-road technology. But the surprises weren’t over yet: that slick rock hill was pretty tame compared to what was up ahead. 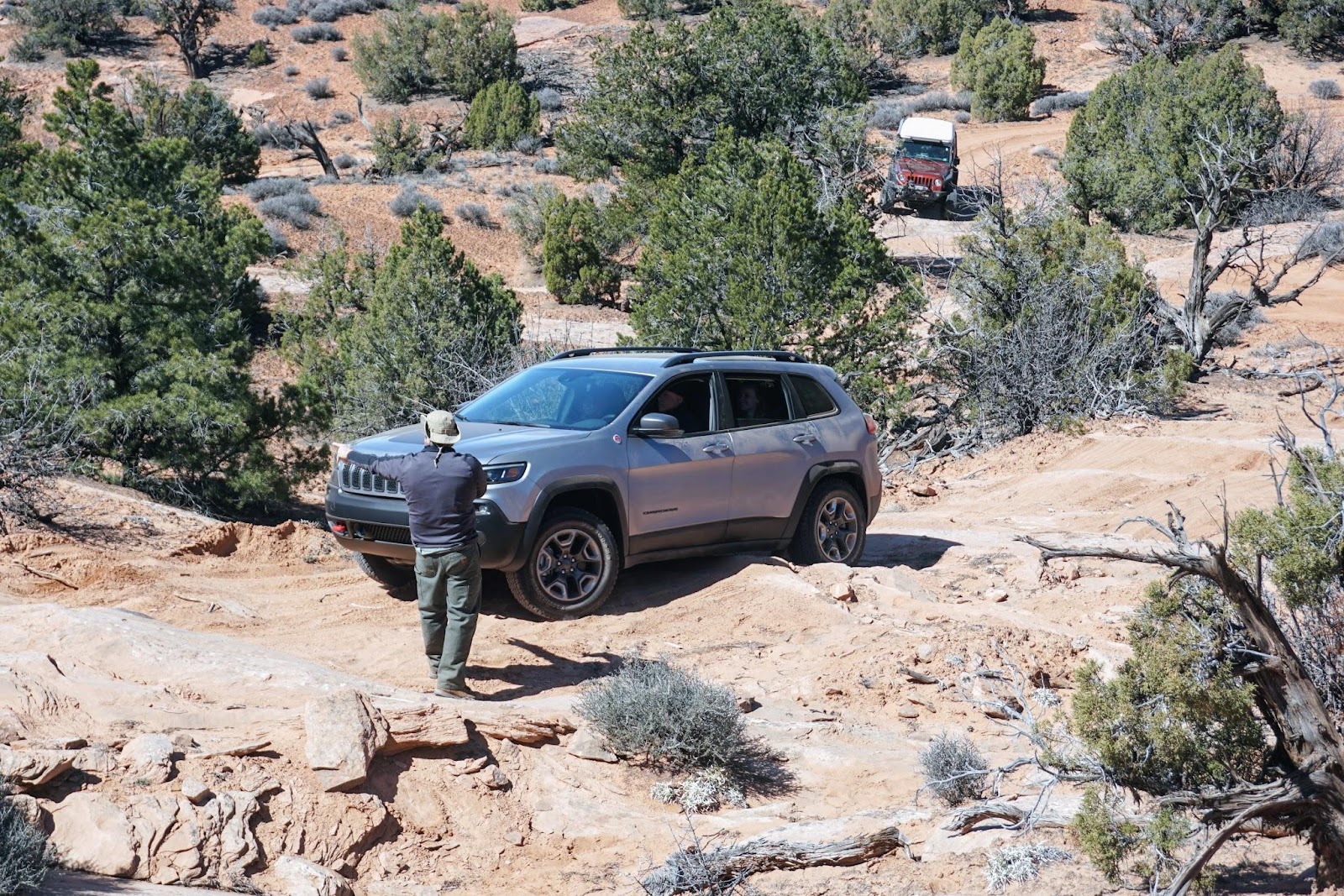 On a downhill portion of the trail overlooking a massive canyon, we came upon a series of rock ledges. Per the directions from the guide, it was here that we tested out the Trailhawk’s Hill Descent Control. Manufacturers like to bill these systems as “off-road cruise control,” as they enable the vehicle to crawl down a slope with the perfect ratio of power and braking sent to each wheel. The system worked as intended, but not without the now-familiar cacophony of noises emanating from below. 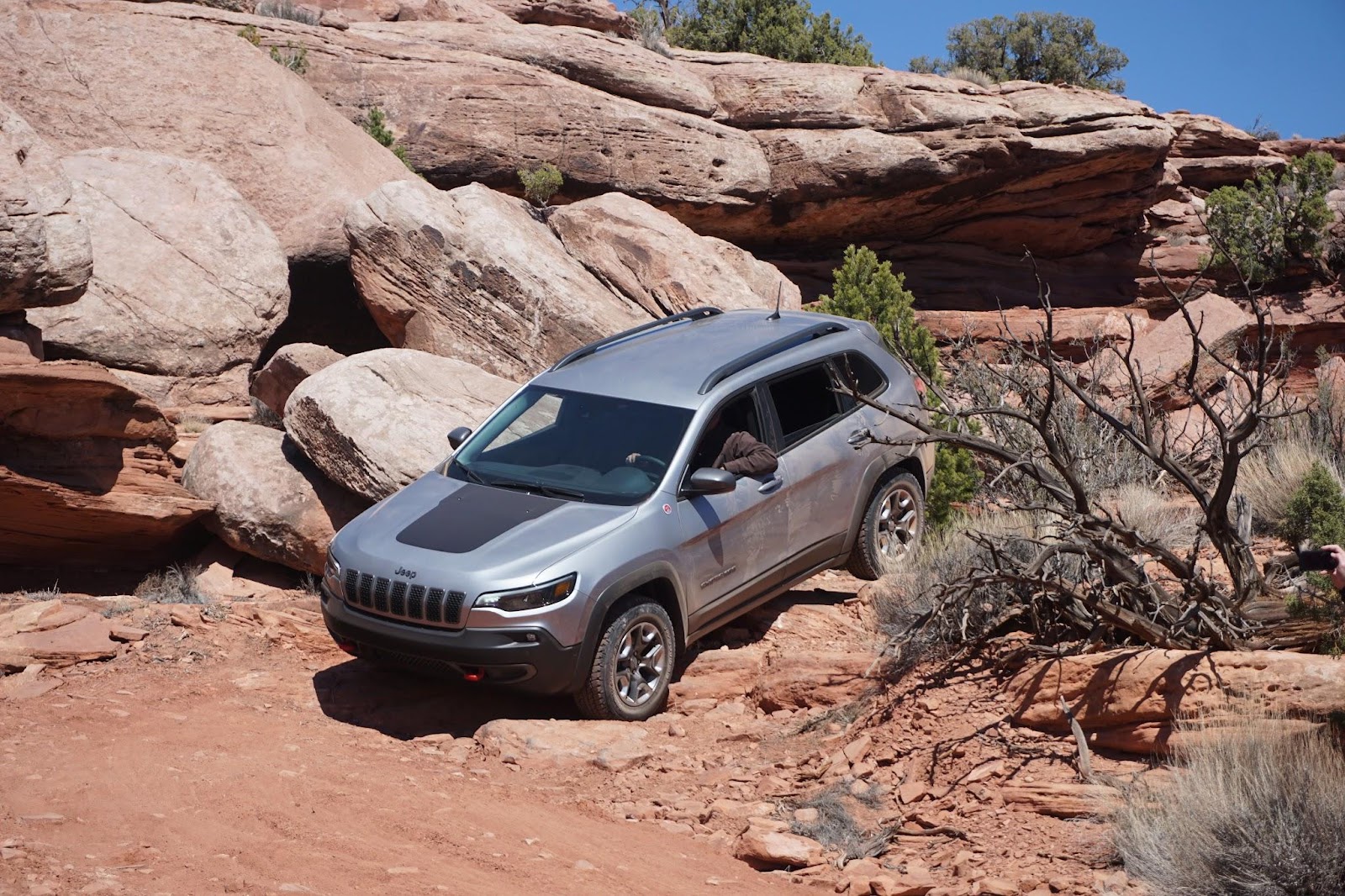 In a real-world scenario, the best thing about these systems is how they gently propel the vehicle down a ledge or over a rock. In situations where a human might over-apply the gas and then frantically switch to the brake as the vehicle suddenly lunges over a rock, using both Selec-Terrain and Hill Descent Control progressed the Cherokee along the trail slowly but surely, with every bit of pillow-like precision possible in a rough and rocky place like Moab.

The Cherokee’s unibody construction and limited suspension travel eventually caught up with it, though. While nothing broke, some of the rock facings we climbed down were just a little too steep, resulting in a few scraped mufflers and scuffed cladding under the front and rear bumpers — not to mention unpleasant slamming of the suspension components over a few particularly large drops.

Nonetheless, the Cherokee Trailhawk got us to the end of the trail, which terminated at an impressive canyon overlook. 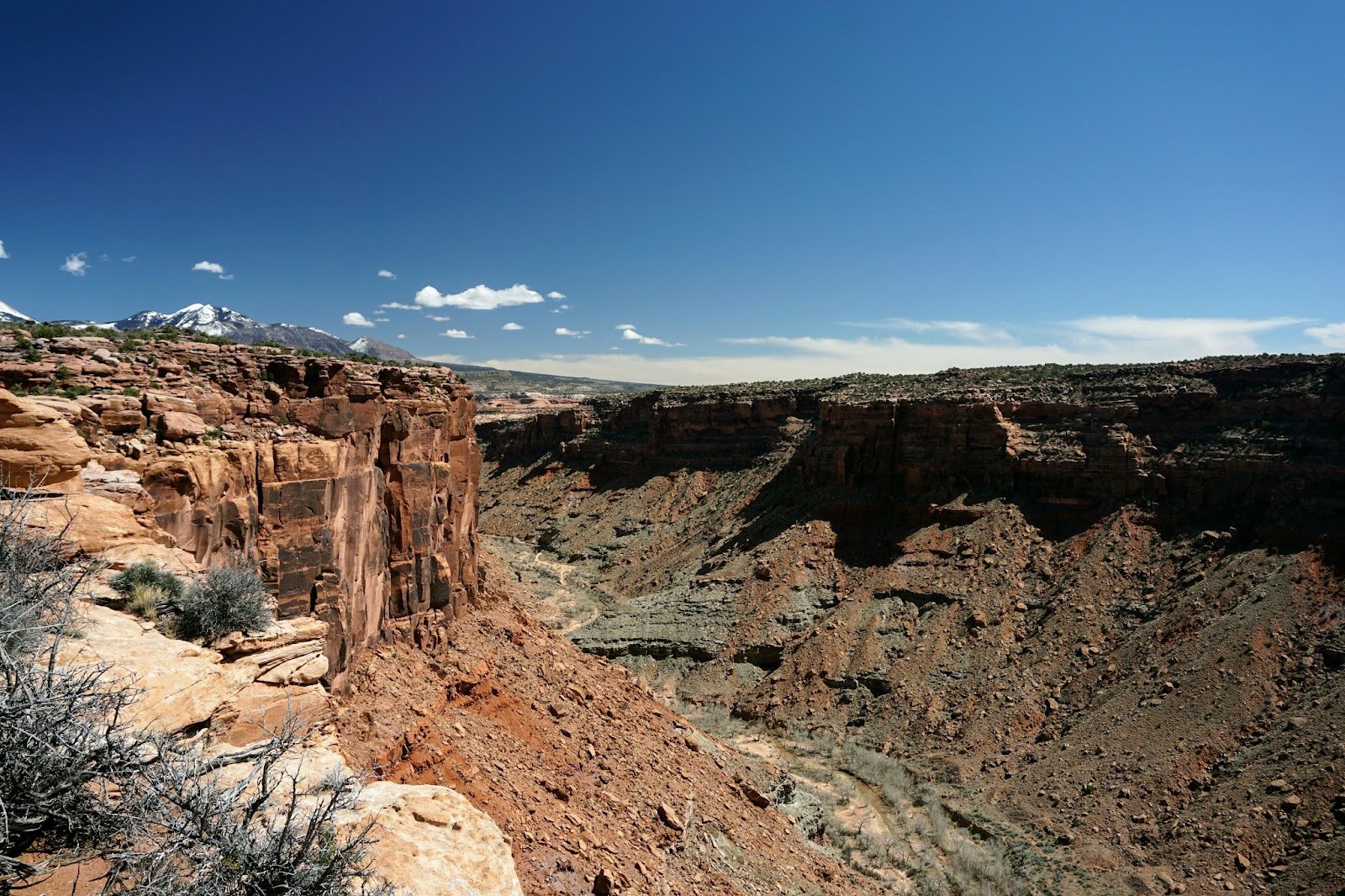 On the way back up the hill, we finally engaged Crawl Control along with the Cherokee’s locking rear differential — the only one in the compact crossover class — which together propelled us over the same leg of the trail we had just descended. I was surprised we made it this far without needing the rear locker, as we were in legitimate 4×4 territory.

A Wrangler Rubicon would’ve been great on this trail, and it wasn’t the easiest off-roading I’ve done — but the Cherokee handles it. Altogether, this thing was impressive. It’s truly capable and it has the tech to get you there. But given the fact that it’s still a unibody SUV with a fully independent suspension and limited ground clearance, the $35,000 question becomes: Is getting there worth all the inevitable scrapes and bumps that you’re bound to get along the way?

For that reason, a base-model 2018 Wrangler Sport might be the ticket if you really want to go off-road and you aren’t as concerned with day-to-day drivability and fuel economy. But if you want a great mixture of on-road poise and off-road ability, there really isn’t a better vehicle on the market than the Cherokee Trailhawk — as long as you’re ready for some of those bumps and bruises. Find a Jeep Cherokee for sale

Chris O’Neill grew up in the rust belt and now lives in Salt Lake City, Utah. He managed to work in the auto industry for a while without once crashing a corporate fleet vehicle. On Instagram he is the @MountainWestCarSpotter.

MORE FROM OVERSTEER:
The Ford F-150 Limited Has This Weird Interior Plaque
I Saw This Bizarre Mahindra SUV in New Zealand
Video | The Mercedes-Benz SL65 Black Series Was the Ultimate SL

These are the best deals on trucks for the month of June 2022.