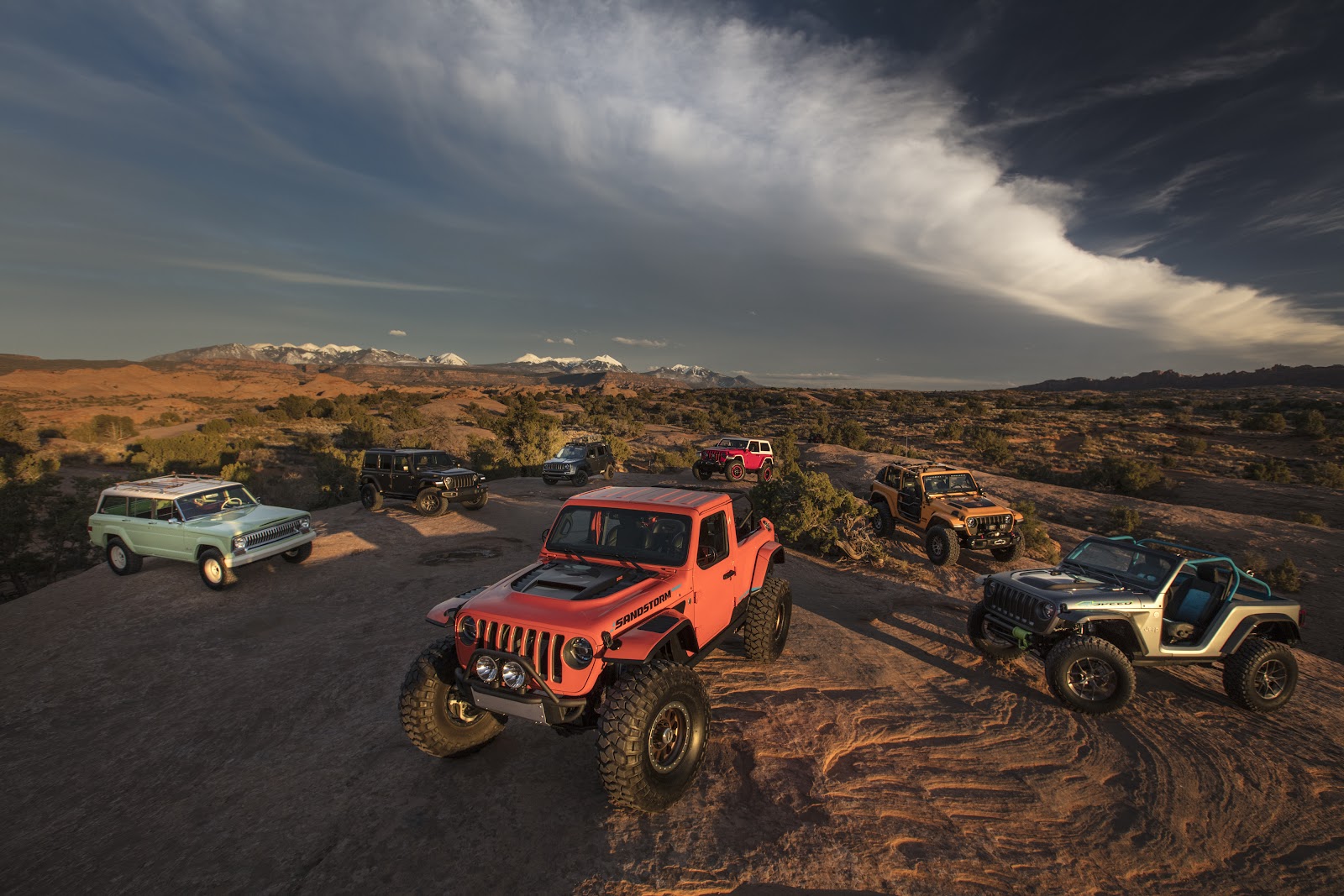 Every year at the Moab Easter Jeep Safari, the Jeep brand unveils a number of new concepts purpose-built for the event. This year, there were seven; five based on the all-new 2018 Wrangler, one based on the Renegade and one based on an old classic.

We were there for the reveal. Here’s a run-down on each one. 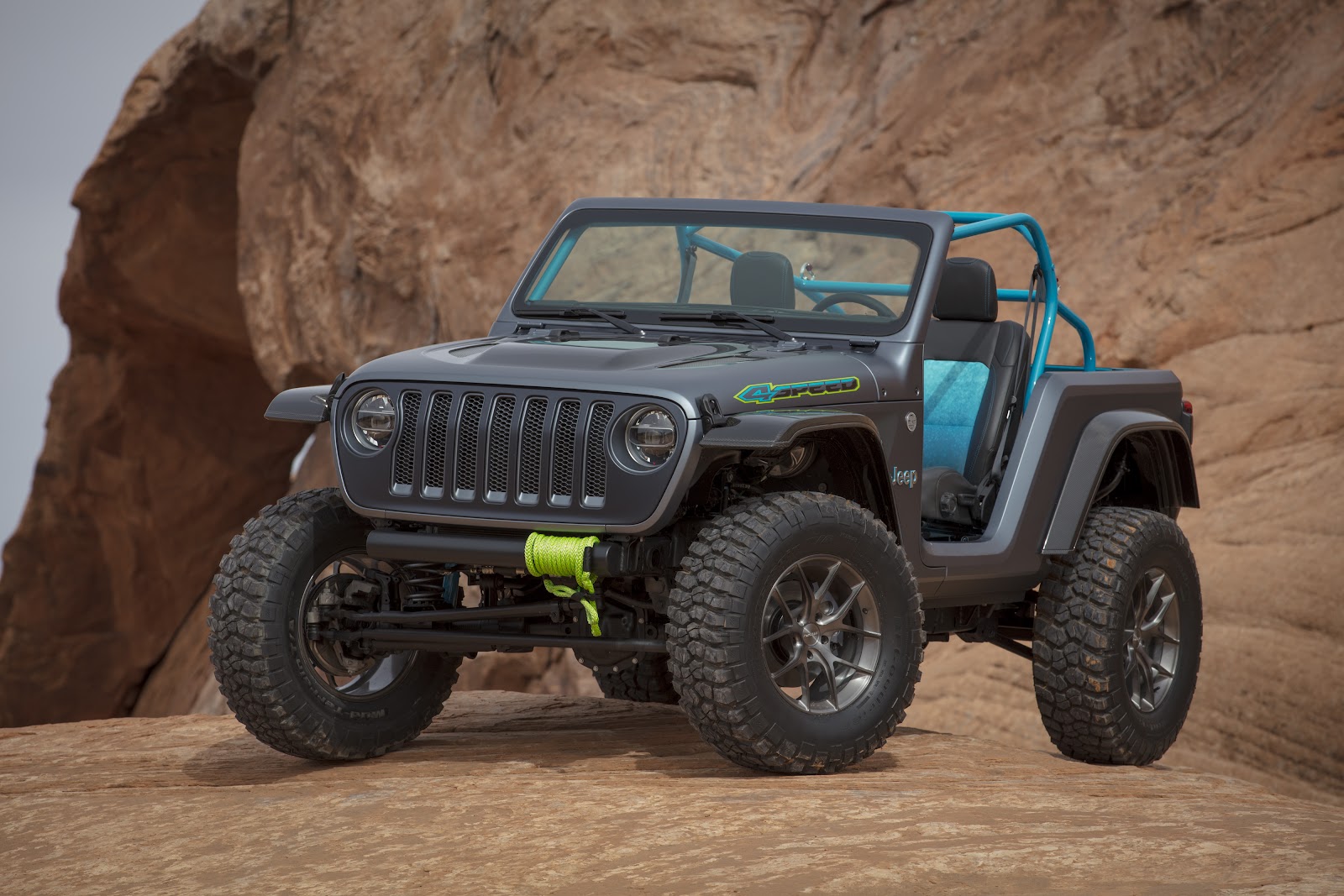 In this context, “4SPEED” seems to stand less for “4-Speed Transmission” and more for “For SPEED!” as the 4SPEED utilizes the Wrangler’s 8-speed automatic transmission mated to 2.0 liter 4-cylinder turbo engine. Where does the SPEED come from then? This Wrangler has been re-engineered to remove as much weight as possible. The third in a line of lightweight Wrangler concepts developed for past iterations of the Jeep Safari, the 4SPEED is a followup to the Pork Chop and Stitch concepts from 2011 and 2013, respectively. Lightness comes courtesy of a carbon fiber hood, fender flares and rear tub, in addition to a custom, minimalist roll-cage and rear tailgate along with a simplified dashboard and shortened windshield. To round it all out, the rear seats have been removed and the 4SPEED’s overall length shortened by 22 inches. All of this weight reduction means the 4SPEED rides two inches higher than stock without the need for a lift kit. 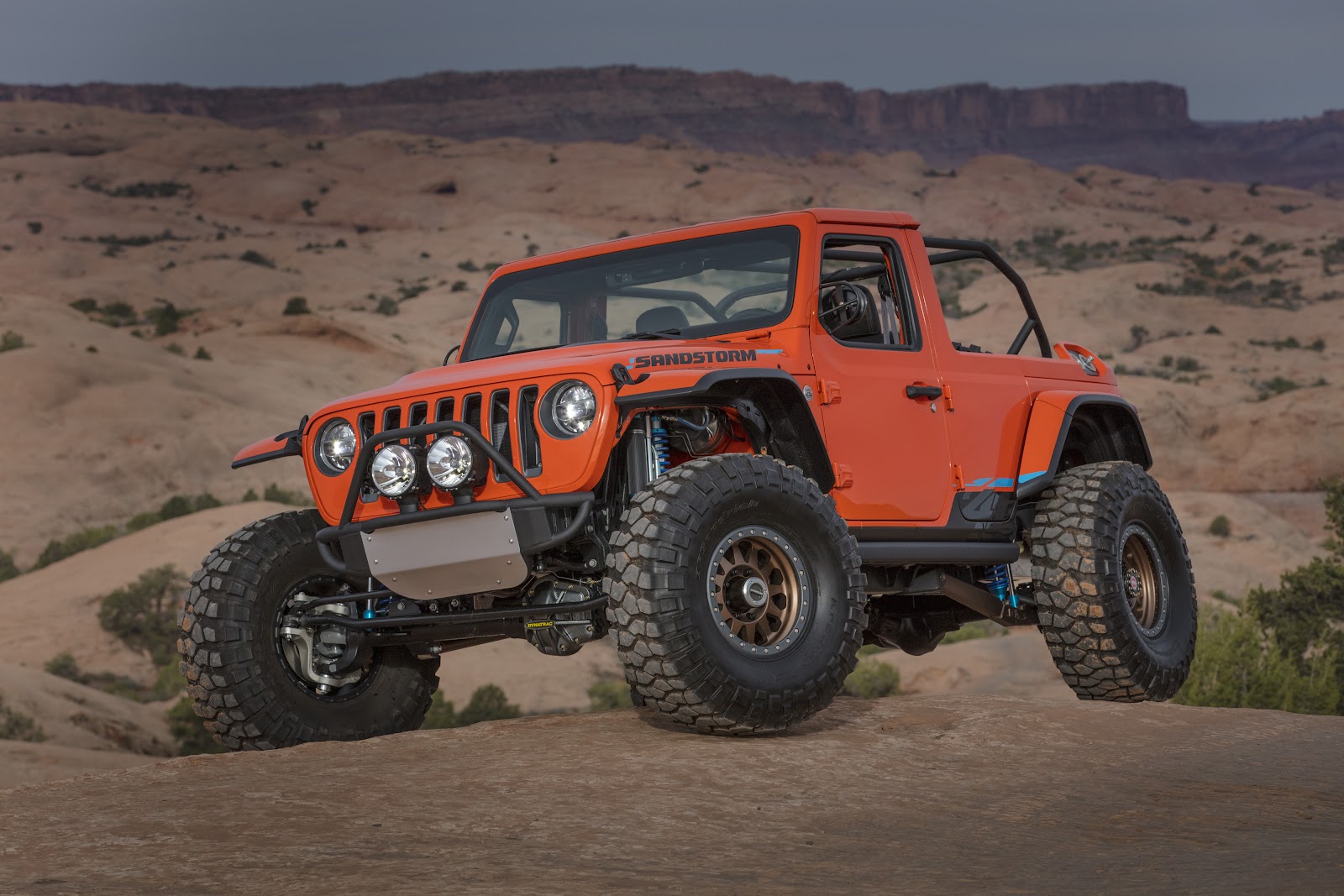 The Sandstorm is Jeep’s take on an off-road desert racing truck, in this case designed to compete in the off-road rock crawling race, King of the Hammers. Under the hood, Jeep has stuffed a 6.4 liter Hemi V8 and mated it to a 6-speed manual transmission. The real fun comes from between the wheels though, which in this case are surrounded by 39.5-in BF Goodrich Krawler tires. The Sandstorm receives a hardcore, off-road suspension complete with custom coilovers and remote-reservoir shocks, which serve to ensure smooth, consistent dampening. The wheelbase has been increased six inches and other niceties added like a custom roll-cage with an integrated spare tire carrier, and an on-board air compressor with an exterior mounted chuck. While it isn’t immediately apparent, the Sandstorm is derived from a Wrangler Unlimited, and features chopped rear doors for accessing the custom, lightweight rear bucket seats. 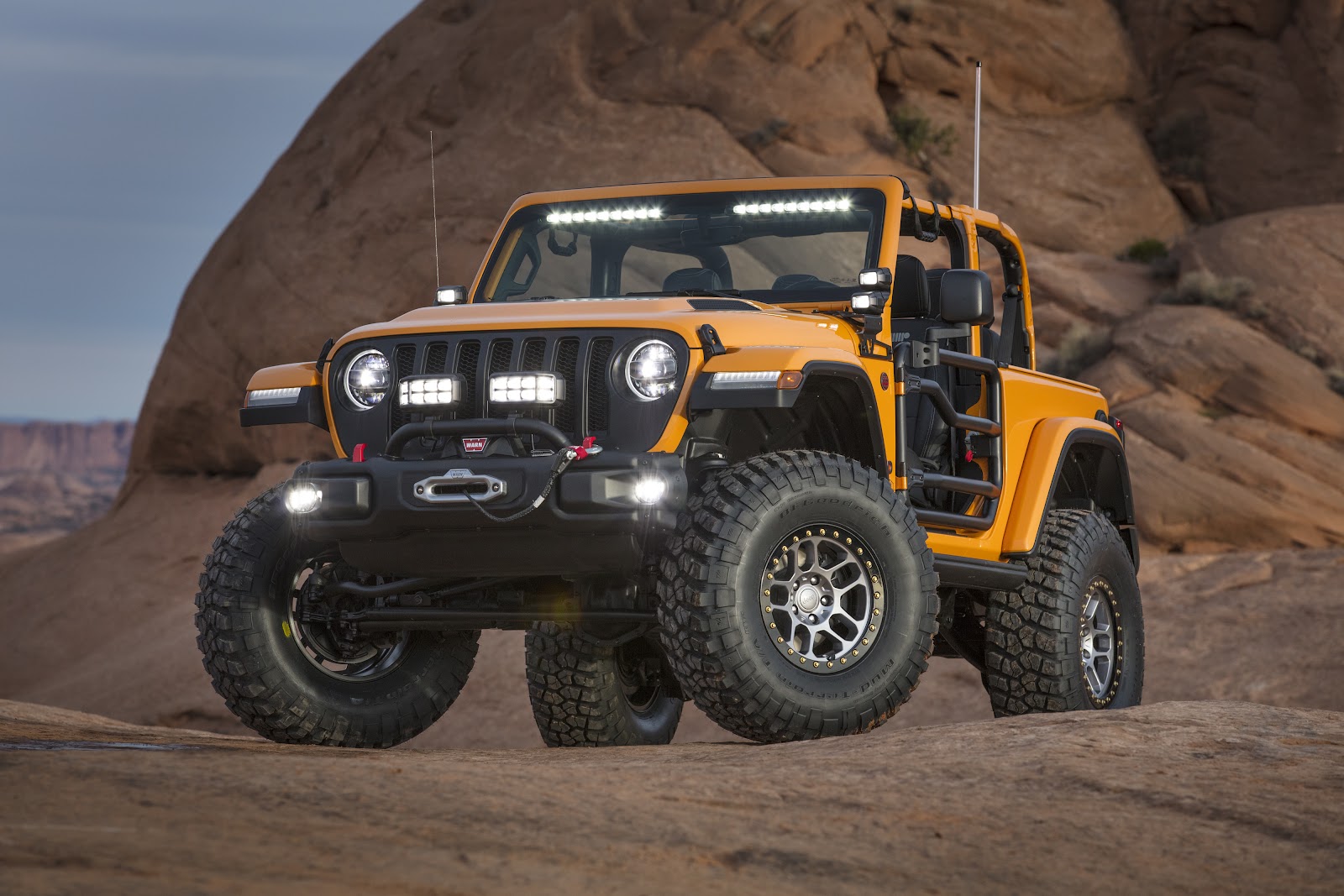 The Nacho Jeep is, well, not your Jeep, unless you choose to go on a shopping spree though the Wrangler accessories catalog, in which case you’d be able to replicate this example after spending around $14,000. The Nacho Jeep serves to demonstrate the endless possibilities offered through Mopar’s Jeep Performance Parts menu. Based on a Rubicon and wearing the low-production Nacho Yellow color, the Nacho Jeep has been modified with each of the following:

Of note here are the tube doors and the off-road scouting light, which switches between red, amber and green based on vehicle speed in order to communicate conditions on the trail ahead. 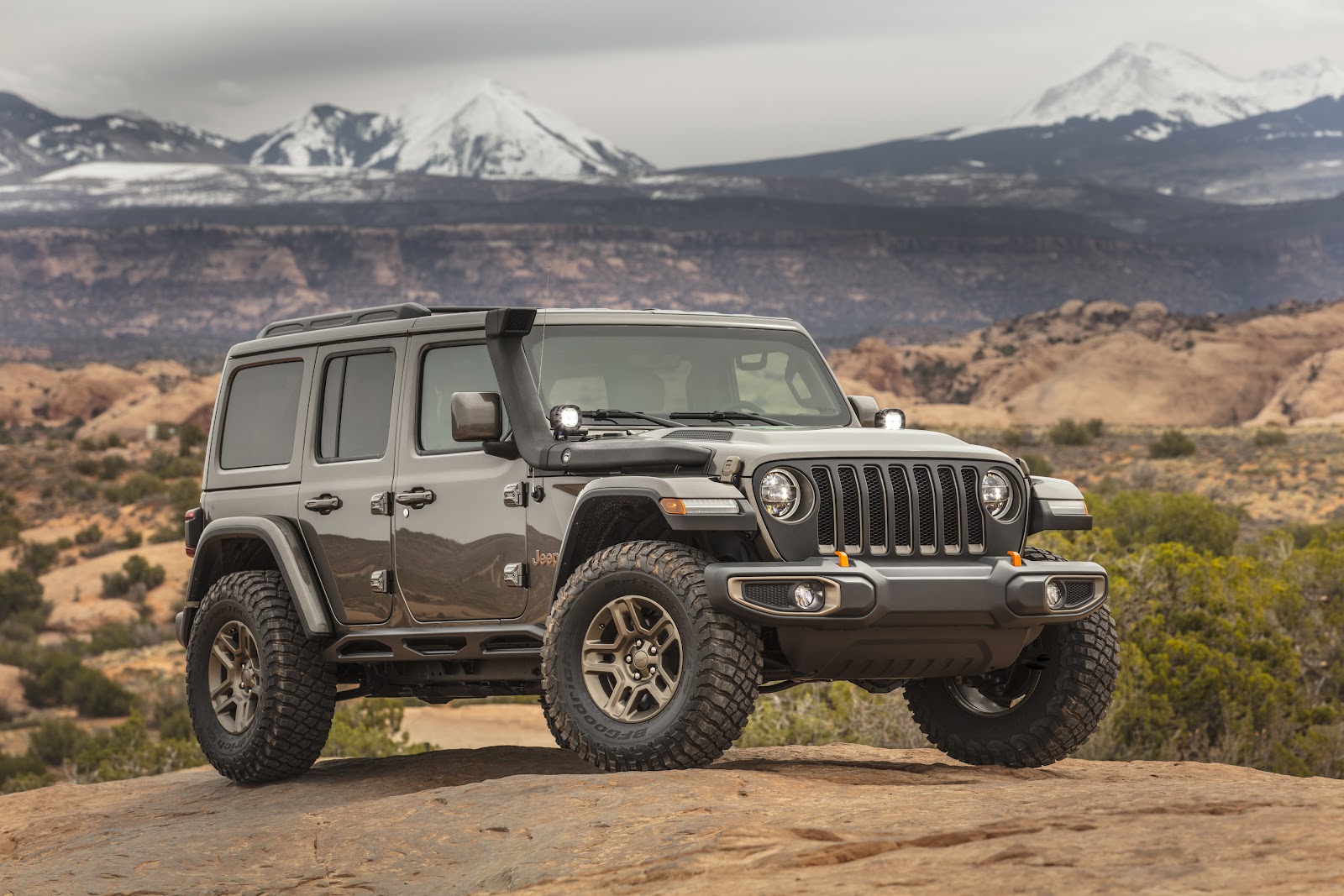 Conceived to be just as comfortable on-road as it is off, the J-Wagon is the only Wrangler concept with a closed cabin. Fittingly, it’s also the only Wrangler concept to wear the Jeep Performance Parts snorkel. The J-Wagon has tinted windows and is painted in a conceptual warm neutral gray color with brass colored accents all around. Additionally, it receives concept rock sliders and a roof-rack, also from the Jeep Performance Parts catalog. Premium leather adorns the inside, while 35-in BF-Goodrich KM3 Mud Terrain tires keep everything planted on-road and off. 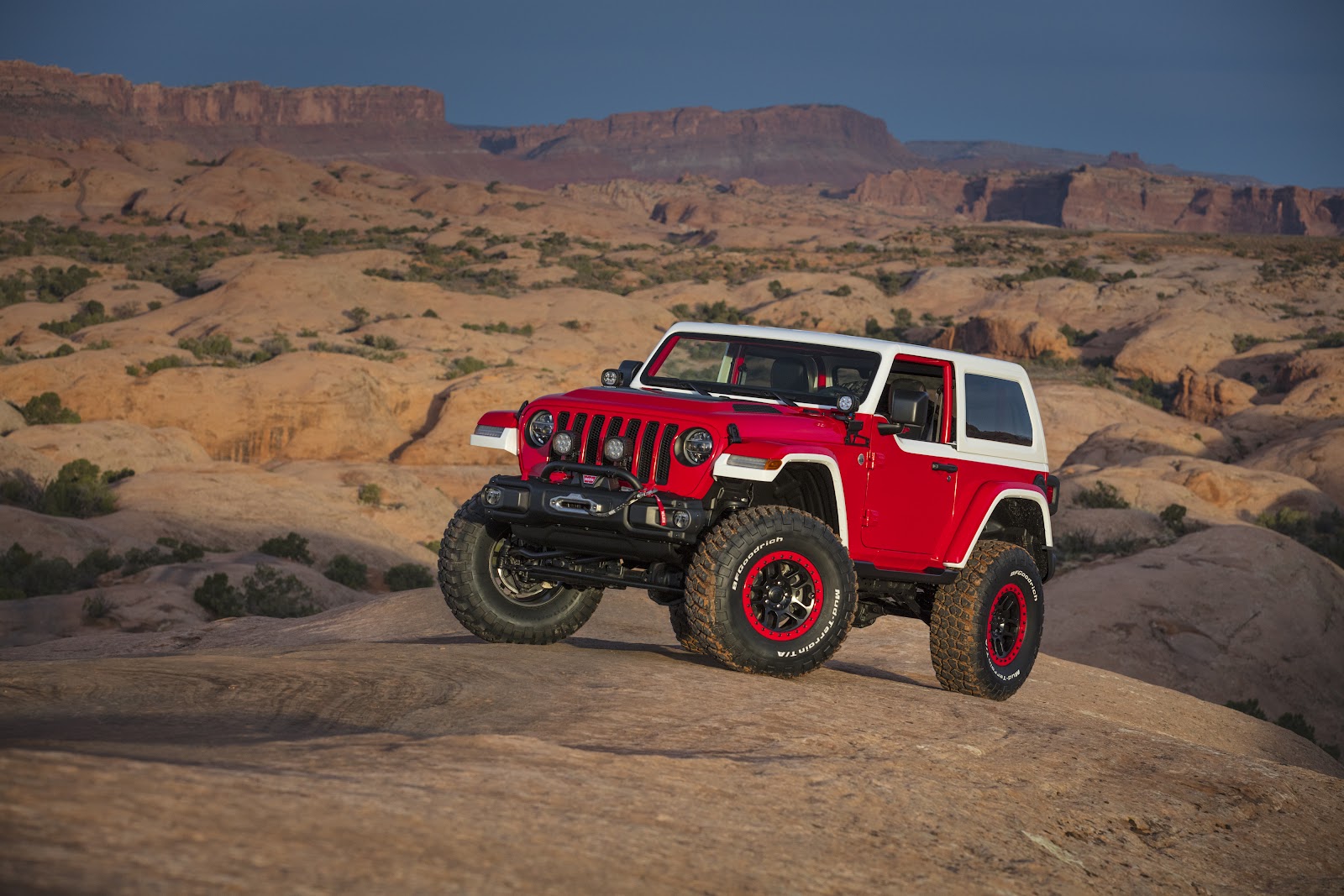 The Jeepster is a reincarnation of an old classic — the Jeepster Commando — sold from 1966 until 1973. The Commando was known for its white, sloping hardtop, a prominent feature on the Jeepster Concept. The windshield on the Jeepster has been chopped and given a steeper rake. The Jeepster also wears half-doors, which blend seamlessly into the custom hardtop. Out back there’s a pair of Rotopax water canisters mounted where you’d normally find a spare tire, which now resides inside where the Wrangler’s rear seats would normally be, and is secured in place by a custom roll cage. 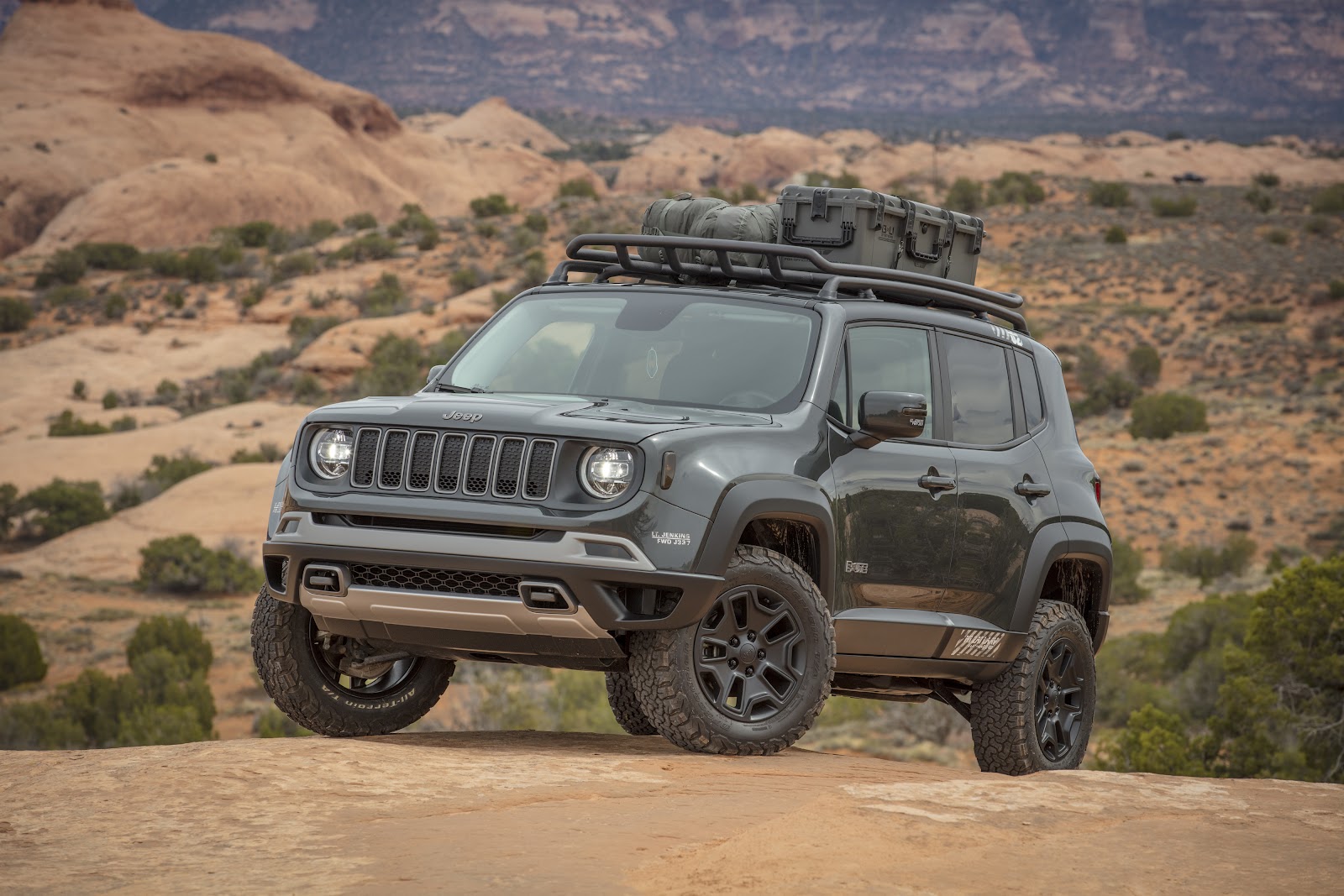 The B-Ute is a Renegade up-fitted with accessories from the Jeep Performance Parts catalog. Taking the Trailhawk trim to a new level, the B-Ute offers a custom platform-style roof-rack, rock sliders, a 1.5-in lift and BF-Goodrich All-Terrain tires wrapped around 17-in wheels with a slight offset, enabling the B-Ute to quietly and efficiently get its occupants to the trailhead and down the trail.

Inside sees modified trim and seating surfaces, and a MOLLE lightweight gear storage system mounted to the backs of the front seats. The B-Ute also receives concept front and rear bumpers and decals around the outside. 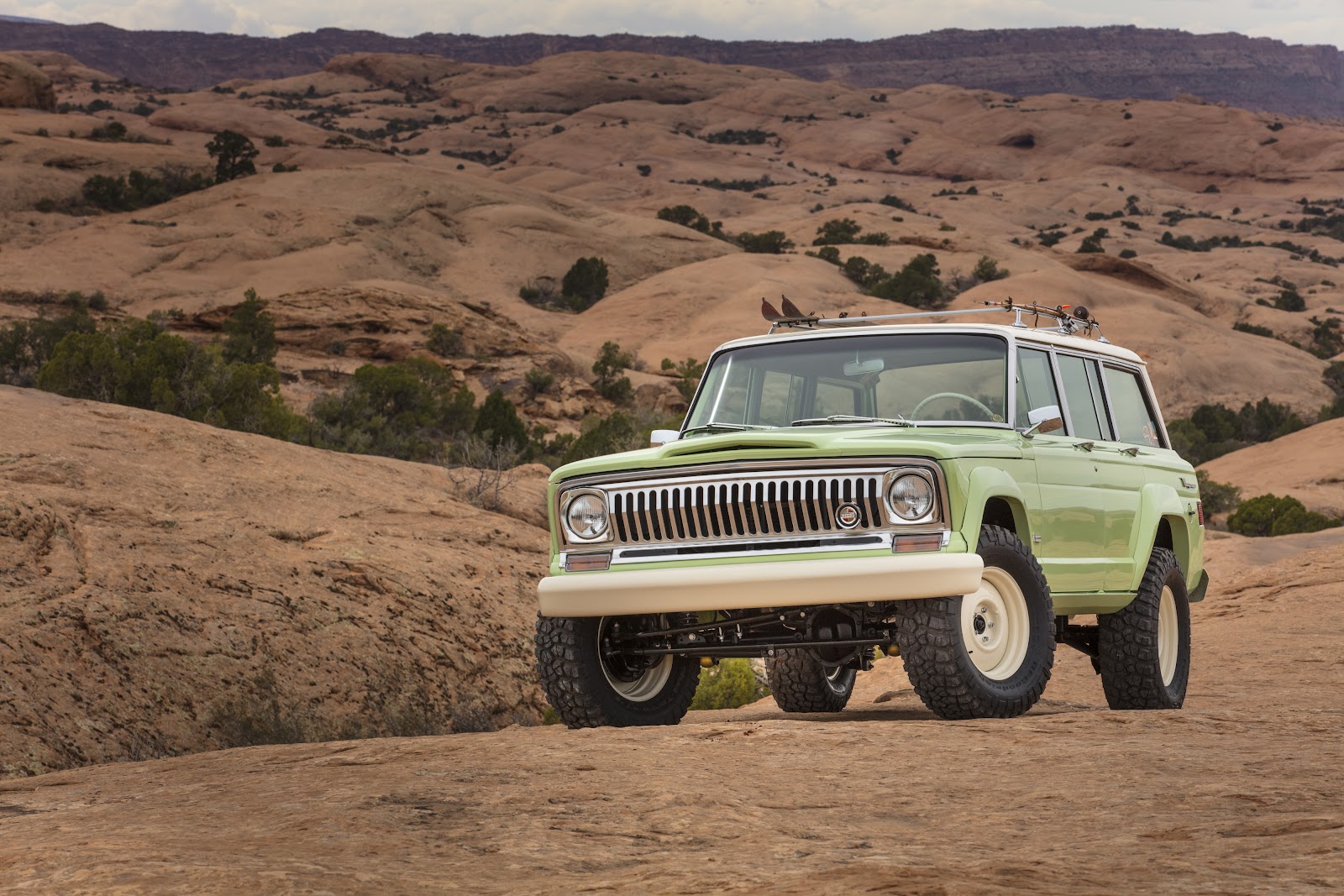 A ‘resto-modded’ 1965 Jeep Wagoneer, the Wagoneer Roadtrip is meant to elicit memories of family vacations past, during the time when the Wagoneer was the ultimate form of family transportation. The body of this example was manipulated during the restoration process, seeing an increased wheelbase and track in addition to modified fenders. Jeep refers to the color as “Mintage Green,” which can also be found all over the interior, forming a striking contrast with the Wagoneer’s “Oxblood” leather seats. Interestingly, the Wagoneer’s side windows were replaced with architectural-grade green glass (take another look at the photos — that’s really unique). The design team also opted to replace the Wagoneer’s original “Rhino” grille with the “Razor”-style grille from a later Wagoneer. During the restoration process, Jeep’s designers and engineers opted to replace the Wagoneer’s factory powertrain with a 5.7-liter V8 mated to a 4-speed automatic transmission from a Dodge Dakota; appropriate, as the original Wagoneer was the first 4-wheel drive vehicle to be sold with an automatic transmission.

The details are the most interesting part of the Wagoneer Roadtrip. There’s a stuffed dog in the back seat. The dashboard and floorboards are littered with old maps and national park brochures. There are stickers from places all over the country adorning the rear windows. There’s vintage luggage in the rear cargo area, which, it turns out, isn’t luggage at all, but rather a cooler, and the valve cover from the Wagoneer’s original inline 6-cylinder engine has been re-purposed as the lid to a toolkit housing some period-correct recovery gear. A pair of skis and a fishing rod mounted to the roof finish everything off.

These are the best deals on trucks for the month of May.
Read more

Is the platinum version of the Murano a luxury vehicle?
Read more

Does the BMW X4 live up to its badge?
Read more

It's not the most practical car, but the McLaren 570S is a great street car.
Read more

The Enclave is more luxurious than ever, but is it worth the extra price?
Read more