Video | The Jeep Wayout Concept Is the Ultimate Overlanding Gladiator

One of the coolest concepts revealed by the Jeep design team at this year’s 2019 Moab Easter Jeep Safari was the Jeep Wayout, which serves as an example of the ultimate Gladiator overland build.

Overlanding is the concept of vehicle-reliant travel. Since overlanders demand more from their vehicles than just basic transportation, they’ll typically modify their truck or SUV to fit their unique adventuring needs. These modifications can range from simple off-road tires and a roof rack all the way to complex setups with heavy-duty suspensions, showers, awnings and roof-top tents. The Wayout follows this latter route, all with a fun, adventurous theme.

Notable features of the Jeep Wayout — which began its life as a basic Gladiator Rubicon — start off up front. A Mopar bull-bar, accessory driving lights and a Warn winch are mounted to the bumper. The Wayout also has a black grille from the Mopar accessories catalog, along with wire mesh over the headlights to protect them from impact with objects on the trail.

One of the Wayout’s more easily overlooked features is its hood, which comes from the European market Wrangler, and is taller than the hood you’ll find on U.S.-market Wranglers and Gladiators as it’s designed for compliance with European pedestrian impact regulations. The Wayout also has a snorkel on the passenger side and connections for its on-board air compressor integrated into the base of the driver’s side A-pillar. 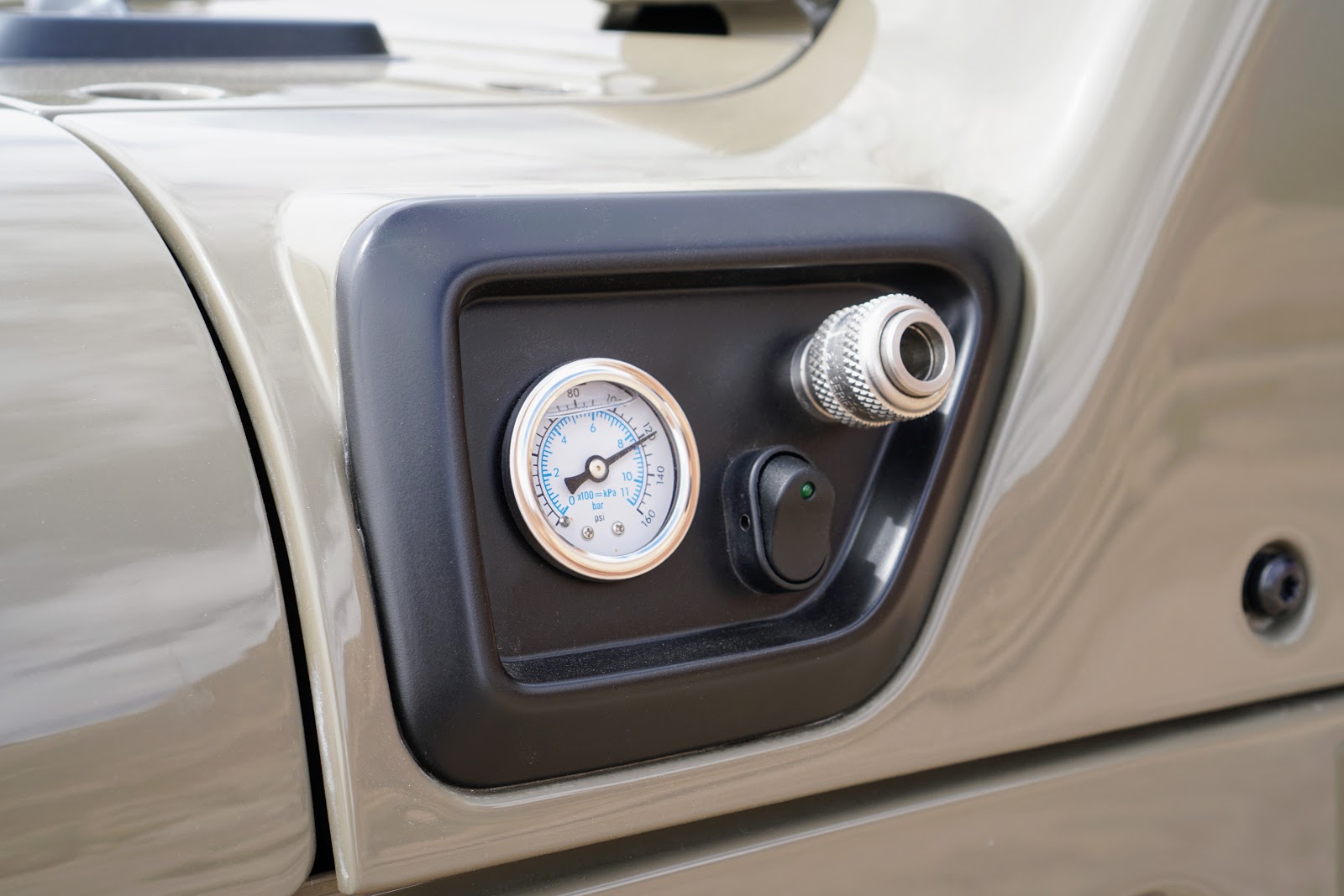 Moving on, and the Jeep design team opted to add steps to the Wayout’s rock rails, which make it easier to access the bed. Additionally, the Wayout wears simple steel wheels painted to match its green exterior, which is a color known as "Gator" that will be available on the production Gladiator down the road.

The Wayout’s top had been painted a safari-appropriate beige, as well and modified to allow the rack-mounted roof-top tent to sit lower on the custom bed rack. In the bed itself was a set of Mopar drawers, great for organizing gear and supplies.

For shade at the campsite, the Wayout had a 270-degree fold-out awning mounted along the passenger side. Finally, as you can see in the photos, there was a set of custom fuel canisters integrated into the bed — a nice touch that would theoretically hold enough fuel for an extra 60-or-so miles of range on the trail.

Inside, the Wayout wore custom brown Katzkin leather with a laser-cut topographical map pattern, mimicking the decals on its exterior. Rounding things out were a variety of custom-made national park stickers stuck to the dash and roof.

Altogether, the Wayout was particularly cool because just about all of its modifications, aside from the fuel canisters, could be purchased on the aftermarket and installed by a Gladiator owner, provided they use a little creativity. This serves to further illustrate just how endless the possibilities are when it comes to building the ultimate Gladiator. Find a Jeep Gladiator for sale

How to Disinfect Your Car During the Coronavirus Pandemic

Coronavirus can live as long as three days on the surfaces in a car. Here is how to kill it safely and effectively.
Read more

What Are Safe Coronavirus Disinfectants for Your Car?

Buying a Used Ford F-150: Everything You Need to Know

The Ford F-150 is America's best-selling pickup, which is why it's also a great used pickup value for people looking to save money.
Read more

Buying a Used Chevrolet Tahoe: Everything You Need to Know

A used Chevrolet Tahoe can handle all your big family needs and do so at a reasonable price and with a long record of reliable service.
Read more

Buying a Used Jeep Wrangler: Everything You Need to Know

With its open-air cabin, rugged off-road ability and cult-like following, a used Jeep Wrangler may be most fun you can have on four wheels.
Read more

Is Now a Good Time To Buy or Sell a Used Car?

Vehicle sales are down. Can consumers use this to get a great deal on a used car?
Read more

CAR INFO YOU SHOULD SEE