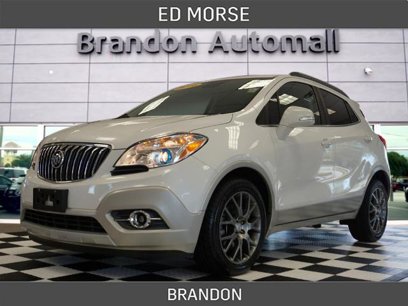 About the 2016 Buick Encore

The Encore adds a new Sport Touring model with a more powerful engine for 2016. See the 2016 Buick Encore models for sale near you

Which Encore is the Best?

The Encore is an excellent crossover for shoppers who don't need lightning-quick acceleration or a huge interior. In terms of choosing a trim level, we have two suggestions: If you test drive a base-level Encore and find yourself wanting more power, go with the new Sport Touring. If performance isn't important, we'd choose a Leather or Premium model, which offer luxury-car amenities for a highly reasonable price. Find a Buick Encore for sale

The Encore ($25,000) is well-equipped for a base model. Many upscale features are standard, including 18-inch alloy wheels, a leather-wrapped steering wheel, a power driver's seat and a rearview camera. Also included is Buick's IntelliLink infotainment system with a 7-in color touchscreen. Of course, the Encore also has all the features you'd expect from a car in its price range, such as remote keyless entry, cruise control and steering-wheel-mounted audio controls.

The new Sport Touring ($28,300) adds the Encore's new 153-hp engine as standard equipment, along with 18-in alloy wheels and a rear spoiler.

Next up is the Encore Leather ($29,200). Unfortunately, Leather models return to the base-level engine -- but the trim adds even more premium items, including a heated steering wheel and heated front seats, a power passenger seat and a driver's-seat memory package.

Topping the Encore range is the Premium ($30,700), which also comes with the base-level engine. In addition to standard equipment from the Leather model, it adds a Bose sound system, rain-sensing wipers, front and rear park assist, a forward-collision alert system and a lane-departure warning system.

The all-wheel-drive Encore received 5-star overall government crash-test scores, while the 2-wheel-drive model earned four stars overall. Both models earned five stars in front and side tests and four stars in rollover tests. In tests carried out by the nonprofit Insurance Institute for Highway Safety, the Encore generally performed well, except for a troubling Poor rating in the group's new front small-overlap assessment -- a test that has tripped up many new vehicles.