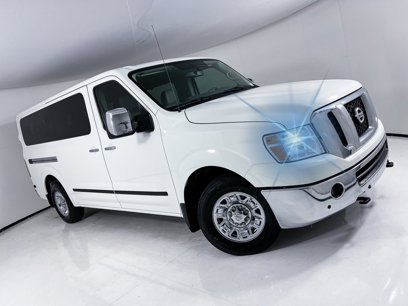 For 2019, the Nissan NV cargo and passenger vans get a 7-in display audio system with a USB, auxiliary input, Bluetooth and iPod connectivity. On cargo vans, the Backdoor Glass package is expanded to the S and SV V8 models.

Which NV is the Best?

For fleet-limo service, you'd be hard-pressed to improve on the NV passenger van. After all, it has seating for 12, easy access in and out and plenty of cargo area, even with four rows of seats. If you're only carrying cargo, the standard-roof NV is more than adequate, especially when equipped with the Titan's 5.6-liter V8. We'd resist the urge to load it up, preferring a middle-of-the-road approach.

Find a Nissan NV for sale

The 2019 Nissan NV comes in both commercial and passenger models, with two roof heights and three trims: S, SV and SL.

The NV 2500 SV ($32,725) includes the same equipment as the 1500 SV plus a center console with lockable storage, two additional cup holders and a sliding table. High-roof models get an overhead console, while heated side mirrors are standard on models equipped with the V8 engine.

Other options are bundled into packages that are unique to each trim. They include a vinyl seat package for the S trim, while the SV and the SL can be equipped with the Navigation package that adds a 5.8-in touchscreen navigation system with NissanConnect mobile apps. Other options include rear-door glass and various dealer-installed cargo-management packages.

Active safety, which is the ability to avoid an accident, is enhanced by a relatively low center of gravity in commercial-van terms. Should you collide with something, Nissan's advanced-airbag system with dual-stage front airbags is there to protect you. Side-impact airbags for front-seat passengers and roof-mounted supplemental curtain airbags are standard on the passenger and cargo vans. The NV van has not been crash-tested.

2019 Nissan NV vs the competition

2019 Ram ProMaster -- The RAM ProMaster features a potent V6 engine, two wheelbase options and an equally large cargo compartment, but a comparable size model starts about $2,000 more than the NV. The ProMaster also comes in chassis-cab and cutaway configurations.

2019 Ford Transit -- Like the ProMaster, the Ford Transit is a modern European van brought stateside. It features numerous engines and configuration options, as well as high-tech features designed to improve productivity, but its base price is much higher than the NV's.

2019 Chevrolet Express Van -- Although the Express van is nowhere near as roomy or tall as the NV, it has its perks. Its standard V6 is more powerful than the V6 engine in the NV, and its long service means it's well-known to fleet mechanics. There's also a turbodiesel option.