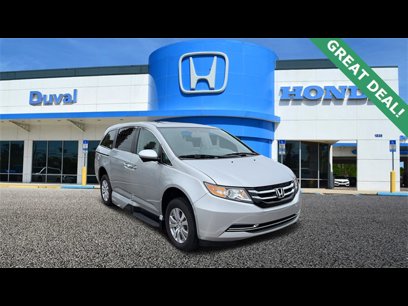 About the 2015 Honda Odyssey

Following several updates for 2014 -- including freshened styling and a few new features -- the Odyssey is unchanged for the 2015 model year.

How Much Does a 2015 Honda Odyssey Cost?

Above the EX is the EX-L ($36,600), which adds a power sunroof, a power lift gate, leather upholstery, heated front seats and a chilled storage box. Honda also offers the EX-L with options such as a rear-seat DVD player and a navigation system.

Next up is the Odyssey Touring ($43,000). The trim adds 18-in alloy wheels, driver memory for seats and mirrors, fog lights, and front and rear parking sensors. It also includes standard navigation and rear-seat entertainment.

Many people promise themselves that they'll never buy a minivan, but for millions of Americans, family life necessitates owning one. Should they climb behind the wheel of the Odyssey, they'll be pleasantly surprised by its excellent driving characteristics. Most impressive is the power output from the 3.5-liter V6.

When a driver puts his or her foot to the floor in the Odyssey, it doesn't rocket forward in a jerk of power. Instead, it builds like a force of nature beneath the driver, sending the vehicle smoothly forward across the landscape. Power delivery is linear, intense and quite satisfying.

During hard off-the-line acceleration, the Odyssey does suffer from some front-wheel slippage, but that's to be expected from a 248-hp 3.5-liter V6 engine wedged into the front end of a big family vehicle.

Unfortunately, the fuel mileage we observed wasn't as good as advertised. We suspect that it will take a soft-footed, Zen-like driver to get close to the Environmental Protection Agency's (EPA) fuel economy estimates.

The Odyssey's interior and features are much like those of nearly every other minivan on the market. The most notable difference between the Odyssey and its competitors is its interior build quality: The seats, dash, storage compartments and trim in the Odyssey are all surprisingly well constructed. Every surface in the Odyssey looks and feels sturdy.

Chrysler Town & Country -- The Town & Country and its Dodge Grand Caravan mechanical twin offer some of the best bargains in the minivan realm, but their old designs and low-rent interiors are no match for the more modern Odyssey.

Nissan Quest -- Offering an excellent engine, impressive power and a wide range of features, the Quest is an excellent Odyssey rival that's far too often overlooked.

Toyota Sienna -- The Toyota Sienna is the Odyssey's closest competitor. Available with a wide range of comfort and convenience features that rivals the Odyssey's list of equipment, the Sienna also boasts optional all-wheel drive for those who need extra traction in harsh weather conditions.

We think even the base 2015 Honda Odyssey is fantastic at $28,575. Budget allowing, we'd definitely upgrade to the Odyssey Touring for $41,180. The Touring includes satellite navigation, rear entertainment and handsome 18-in alloy wheels. Still, you won't be faulted for choosing any model in the Odyssey lineup. Find a Honda Odyssey for sale

Looking for a Used Honda Odyssey ?

The Honda Odyssey . With the largest selection of cars from dealers and private sellers, Autotrader can help find the perfect Odyssey for you.

Find Used 2015 Honda Odyssey Cars for Sale by City in