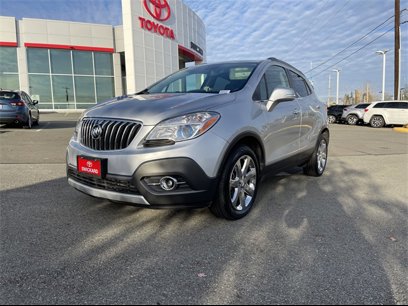 About the 2014 Buick Encore

Since it was all-new last year, the Buick Encore carries over unchanged for the 2014 model year

Which Encore is the Best?

If you can live with the tepid acceleration, the Encore is a strong choice. In terms of picking a trim, we think the base-level Encore has just about everything you might need. But if you're going to splurge, go with an Encore Premium. For just $5,000 more than a base-level Encore, it offers high-end luxury car amenities.

Find a Buick Encore for sale

The Encore comes in four trim levels. Base-level models are dubbed simply Encore, while the remaining trims are Convenience, Leather and Premium.

The Encore ($25,000) is well-equipped for a base model. Many upscale features are standard, including 18-inch alloy wheels, a leather-wrapped steering wheel, a power driver's seat and a rearview camera. Also included is Buick's IntelliLink infotainment system with a 7-in color touchscreen. Of course, the Encore also has all the features you'd expect from a car in its price range, such as remote keyless entry, cruise control and steering-wheel-mounted audio controls.

Next up is the Encore Leather ($28,500), which adds even more premium items. Headlining the additions are a heated steering wheel and heated front seats, though the Leather also adds a power passenger seat and a driver's seat memory package.

Topping the Encore range is the Premium ($30,000). In addition to the standard equipment from the other models, it adds rain-sensing wipers, front and rear park assist, a forward collision alert system and a lane-departure warning system.

Major options for the Encore include a power sunroof, roof rails and all-wheel drive.

2014 Buick Encore vs the competition

BMW X1 -- The all-new X1 functions more like a tall wagon than a crossover. That's in contrast to the high-roofed Encore, which has a much more traditional SUV height. The X1 is also sportier thanks to turbocharged engines and standard rear-wheel drive. But the two models are priced -- and sized -- similarly.

Mazda CX-5 -- Mazda's latest compact SUV doesn't have the Encore's premium badge, but it does boast similar gas mileage. And some upscale models are just as well-equipped as the nicest Encores.

Find Used 2014 Buick Encore Cars for Sale by City in