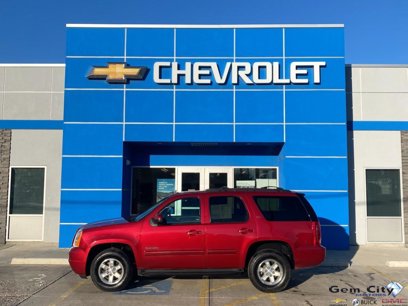 35,999
79,865 miles
See estimated payment
Can be shipped to
Chevrolet of South Anchorage

The Yukon's hybrid engine is no longer offered for the 2014 model year. Additionally, the SUV's Convenience Package, once optional on SLE models, is now standard. Otherwise, the Yukon is unchanged ahead of its 2015 redesign.

Which Yukon is the Best?

The best Yukon largely depends on your needs. If you want luxury, it's hard to pass up the Yukon Denali and its long list of standard features. But if you're looking for the best value, we'd recommend a modestly equipped Yukon SLT. It'll give you everything you want, without the huge cost -- or the frivolous features -- of a Denali.

Find a GMC Yukon for sale

The 2014 GMC Yukon is offered in three trim levels: base-level SLE, mid-level SLT and an upscale version known as the Yukon Denali. Regardless of whether you choose a regular-length Yukon or a Yukon XL, trim levels mostly include the same features and equipment.

Step up to a Yukon SLT ($49,900 for a Yukon; $52,100 for a Yukon XL) and you get leather upholstery, fog lights and, more importantly, a longer list of options. Such features include power front seats, ventilated front seats, a navigation system and a power rear lift gate.

The Yukon's extensive options list includes a rear-seat DVD player, a power sunroof, a towing package and, for SLE and SLT models, several features that are standard on higher-level trims.

When confronted with a collision scenario, size does matter. The Yukon will be bigger than most things it collides with. But to improve your survivability if a collision does happen, the Yukon includes standard side-curtain airbags with rollover protection for all seating rows and standard seat-mounted side-impact airbags for the driver and right front-passenger, as well as seat belt pretensioners, which minimize passenger movement during a collision. The Yukon also offers an available blind spot warning system. We expect the 2015 model will include even more options.

In National Highway Traffic Safety Administration (NHTSA) tests, both Yukon models -- the regular-length and the XL -- received four overall stars, including five stars for front and side impacts, as well as three stars in the rollover test.

2014 GMC Yukon vs the competition

Chevrolet Tahoe/Suburban -- The Tahoe and Suburban are mechanically similar to the Yukon and Yukon XL. The Yukon, especially in Denali form, offers more high-end features. But if you just want a big SUV for carrying your family and towing, both will suffice.

Ford Expedition -- While its popularity has waned in recent years, the Expedition was once the Yukon's chief rival. It's similar in many ways, with a body-on-frame chassis, 3-row seating and V8 power. However, it is also getting old.

Infiniti QX80 -- Infiniti's large SUV is especially a competitor for the Yukon Denali. It offers a lot of gadgets, 3-row seating and a large V8 engine.

Mercedes GL-Class -- If you're looking at the Yukon Denali, consider this Mercedes full-size, 3-row SUV. The prices and amenities are similar, and you get the alluring Mercedes name.

Find Used 2014 GMC Yukon Cars for Sale by City in