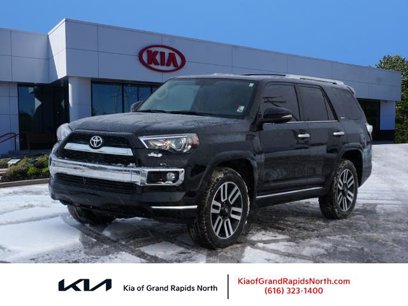 34,499
77,871 miles
See estimated payment
Can be shipped to
Dealer
Get this seller's phone number
Delivery to Your Door
GOOD PRICE

The 4Runner is face-lifted for 2014. In addition to stylistic updates such as new front and rear fascias, the 4Runner now boasts standard Entune smartphone integration. Other new updates are far less extensive, from an overhead console on Trail models to an updated gauge cluster.

Which 4Runner is the Best?

Try the SR5, now standard with Entune, which should keep you around $35,000. Yes, the Limited has desirable luxury and performance features, but it'll run you well over $40,000 when all's said and done. At that price, it's a whole new ballgame.

Find a Toyota 4Runner for sale

The 2014 Toyota 4Runner is offered in SR5, Trail or Limited trims.

Even the SR5 isn't cheap, with a starting price of more than $33,000. Fortunately, it comes nicely equipped, featuring 17-inch alloy wheels, skid plates for off-road protection, an 8-speaker stereo with iPod/USB and Bluetooth connectivity, power lumbar support for the driver and the classic 4Runner power back window. For 2014, the SR5 adds Toyota's Entune infotainment system as standard equipment.

The Trail ($36,500) comes standard with the sunroof and boasts a number of performance upgrades, including a part-time 4-wheel-drive system (optional on SR5), higher ground clearance, an off-roader's version of cruise control called Crawl Control and the Multi-Terrain Select system, which lets you customize the traction-control settings to match the terrain. Optional on Trail models is the Land Cruiser's KDSS suspension, which can disconnect the stabilizer bars to increase axle travel over tough terrain.

Notable options on all 4Runner models include a power sunroof, a navigation system and a third-row seat. Four-wheel drive is optional on SR5 and Limited models, though it's included as standard equipment on the 4Runner Trail.

The 4Runner comes standard with stability control and eight airbags, including front, side and knee bags for front passengers, and full-length side-curtain airbags. The driver and front passenger also get active head restraints. Rear parking sensors are standard, and a rearview camera is standard on Trail/Limited and optional on SR5.

In government crash tests, the 4Runner scored four stars out of five overall, including four stars for front impacts, five stars for side impacts and three stars for rollover resistance. The independent Insurance Institute for Highway Safety gave the 4Runner its top rating of Good in every category except roof strength, where the rating was Acceptable.

2014 Toyota 4Runner vs the competition

Dodge Durango -- The 3-row Durango feels bulkier than the 4Runner, but it looks great and offers a powerful HEMI V8.

Jeep Grand Cherokee -- Sharing many of its underpinnings with the Durango, the smaller "JGC" is a formidable foe for the 4Runner. It arguably has a more pleasant on-road demeanor, and the Durango's HEMI V8 is available here, too. You can't get a third-row seat, however.

Toyota FJ Cruiser -- If you're drawn to the FJ's distinctive styling, check it out, as it's basically a 2-row 4Runner wearing different duds.

Looking for a Used Toyota 4Runner ?

The Toyota 4Runner . With the largest selection of cars from dealers and private sellers, Autotrader can help find the perfect 4Runner for you.

Find Used 2014 Toyota 4Runner Cars for Sale by City in