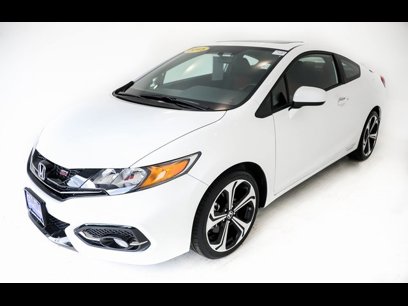 Following major updates over the last few years, the Civic mostly stays the same for 2015 -- with the exception of a new, value-packed SE trim level.

Which Civic is the Best?

To us, the all-new 2015 Civic SE presents the most compelling case of any model in the Civic lineup. One reason is its standard automatic transmission, which already gives it excellent value. Throw in a larger touchscreen, keyless access with push-button start, alloy wheels and Honda's excellent LaneWatch blind spot monitoring system -- all for only a slight premium over the base-level LX -- and you've certainly got our attention.  Find a Honda Civic for sale

The Civic is offered in eight trim levels. Traditional Civic models offer LX, HF, EX, and EX-L trims, along with a new-for-2015 Civic SE. Sport-minded drivers can pick the Civic Si. For fuel economy buffs, there's the Civic Hybrid and the Civic Natural Gas. Available as a sedan or a coupe, the base-level Civic LX ($19,100) includes air conditioning, power accessories such as power windows, locks and mirrors, a 5-inch center display screen, a rearview camera, Bluetooth and a sound system that boasts a CD player, an auxiliary plug, Pandora Internet radio and an iPod interface. Step up to the Civic HF ($20,600) and you'll be driving a model designed to maximize fuel economy. The sedan-only HF boasts low rolling-resistance tires, aerodynamic wheels and underbody panels, and a rear spoiler. Above the LX and below the EX is the new Civic SE ($20,900), which is offered only as a sedan. In addition to including a standard CVT automatic, the Civic SE adds keyless access with push-button start, Honda's LaneWatch blind spot monitoring system, automatic climate control, a 7-in touchscreen and 15-in alloy wheels. Next up is the Civic EX ($21,100), which is once again offered as a sedan or coupe. It adds a power sunroof, 16-in alloy wheels, variable intermittent wipers, HondaLink smartphone integration, and a 60/40-split folding rear seatback. Topping the traditional Civic range is the EX-L ($23,300), which includes larger alloy wheels, leather upholstery, heated front seats and fog lights. EX-L sedan models also include a power driver's seat. Shoppers who opt for the sporty Civic Si ($23,400), offered as a sedan or a coupe, will get a more powerful 4-cylinder engine, along with a limited-slip differential, sport suspension and fog lights. Many of the Si's features mirror the Civic EX's equipment. If it's fuel economy you're after, the Civic offers two choices: the Civic Hybrid ($25,300) or the Civic Natural Gas ($27,200). The Civic Hybrid's equipment roughly mirrors that of the Civic EX, though some EX-L features are optional. The Civic Hybrid also adds standard forward-collision warning and lane-departure warning systems. The Civic Natural Gas boasts the same features as the Civic LX does. Like most Honda models, the Civic offers few options. The exception is for Hybrid, Si, EX and EX-L trims, which are available with a voice-activated navigation system. Safety The 2015 Honda Civic comes standard with stability control, side-curtain airbags, front-side airbags, a rearview camera and 4-wheel anti-lock brakes. EX and EX-L models also boast Honda's LaneWatch blind spot monitoring system, while the Civic Hybrid includes forward-collision warning and lane-departure warning systems. In government testing, the Civic earned five overall stars -- a score made up of 4-star ratings on frontal and rollover tests and a 5-star rating in the National Highway Traffic Safety Administration's side-impact assessment.
See More
2015 Honda Civic vs the competition
Ford Focus -- The Focus comes as a sedan or a 5-door hatch, making its lineup a little more practical than the Civic's. The Focus also boasts a plug-in hybrid model and a sporty ST version, which offer advantages over the Civic Hybrid and Civic Si, respectively. Mazda3 -- The Mazda3 is one of our favorite compact cars due to its excellent combination of fuel efficiency, style, equipment and performance. We also like the available 5-door hatchback body style. Toyota Corolla -- Only offered as a sedan and not available as a hybrid model, the Corolla was fully redesigned last year. Pricing, interior room and equipment are similar to the Civic -- so we suggest you drive both models.

Looking for a Used Honda Civic ?

The Honda Civic has topped the 'best compact car' lists for decades. With extensive standard equipment, a high-quality stylish interior and a new powertrain lineup that comes at a range of price points intended to have something for everyone. With the largest selection of cars from dealers and private sellers, Autotrader can help find the perfect Civic for you.

Find Used 2015 Honda Civic Cars for Sale by City in