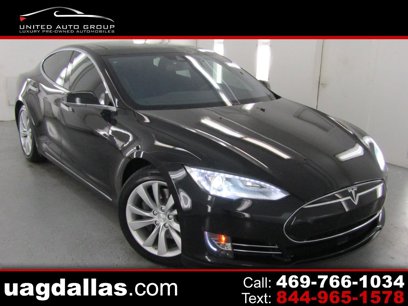 Get real-time updates when the price is lowered or when there are new matches for this search.

Unlike other automakers, Tesla doesn't follow along with model years, preferring instead to immediately make updates and changes when they're ready. The biggest recent change, then, is newly available all-wheel drive, which debuted in late 2014 and comes in three forms: the base-level 70D, the midlevel 85D and the high-performance P85D (the D stands for dual motor).

Which Model S is the Best?

There's no question that the P85D is absolutely the model to have in the Tesla lineup, but at $106,000 with shipping (and before options), it's also the Model S's most expensive selection. We'd stick with a midlevel 85 (or 85D) with a few options, and we'd try to keep pricing below $90,000. It's still big money, but it's a veritable bargain compared to some full-size luxury-sedan rivals. Find a Tesla Model S for sale

The 2015 Tesla Model S comes in four trim levels, largely organized around engine size and drivetrain. Base models are called the Model S 70D and start at $76,200 with shipping. Standard features include automatic xenon headlights, voice control, a 17-inch center touchscreen, a navigation system, rain-sensing wipers, a backup camera, lane-departure warning, a blind spot monitoring system, parking sensors, power accessories, on-board Wi-Fi and Internet connectivity, Internet streaming radio, Bluetooth and automatic braking in case of an emergency. The 70D also includes standard all-wheel drive and a 329-hp motor with a 240-mile range. Next up is the Model S 85, which starts at $81,200 with rear-wheel drive or $86,200 with all-wheel drive. Standard features are the same as the 70D, except for the powerplant. The Model S 85 boasts 362 hp and 265 miles of range in rear-wheel-drive guise or 422 hp and 270 miles of range if you opt for all-wheel drive. Topping the Model S range is the P85D, which starts at $106,200 with shipping. In addition to a whopping 691 hp (221 hp in front and 470 hp in back), the P85D touts a 253-mile range. Other standard features are again identical to the 70D and 85. As for options, the Model S offers several. The Autopilot Convenience Features package ($2,500) adds lane-keeping assist, an automated parking system, adaptive cruise control and automatic high beams. The Smart Air Suspension package ($2,500) adds adjustable air suspension. The Ultra High Fidelity Sound package ($2,500) adds SiriusXM radio and a 12-speaker sound system. There's also a Premium Interior and Lighting package, an Executive Rear Seats package with rear bucket seats rather than a bench, a Subzero Weather package and optional rear-facing seats that increase the Model S's seating capacity to seven for an additional $3,000.
See More
Is the 2015 Tesla Model S a Safe Car?
All Model S cars come standard with a wide range of safety features, including anti-lock brakes, side-curtain airbags, a backup camera, a blind spot monitoring system, parking sensors, a lane-departure warning system and automatic braking if an impending collision is detected. Options include adaptive cruise control, lane-keeping assist, an automated parking system and automatic high beams. In government crash tests, the Model S scored a perfect 5-star overall safety rating, earning five stars in frontal, side and rollover assessments. The Model S has not been tested by the nonprofit Insurance Institute for Highway Safety.
2015 Tesla Model S vs the competition
2015 BMW i8 -- If you want a high-performance EV, you might want to consider the plug-in hybrid BMW i8. It isn't a sedan like the Model S, but rather it's a sporty coupe with low-slung, look-at-me styling. Pricing is a little higher, but there's a range-extending gasoline engine to back up the electric motor. 2015 Jaguar XJ -- For those who think the Model S's styling is a little bland, the Jaguar XJ is the antidote. It offers a handsome exterior and interior, along with Tesla-rivaling performance. 2016 Mercedes-Benz S-Class -- If you're still not sold on the whole electric thing, few cars do full-size luxury sedan better than the S-Class. You'll get more available equipment, similarly futuristic center screens and undeniable road presence that outshines even the Model S.

The Tesla Model S . With the largest selection of cars from dealers and private sellers, Autotrader can help find the perfect Model S for you.