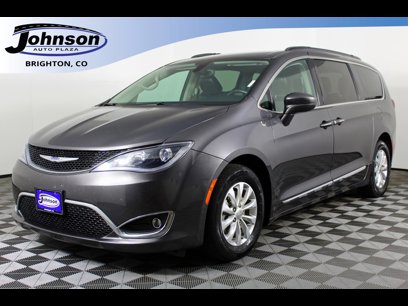 About the 2017 Chrysler Pacifica

What's New in the 2017 Chrysler Pacifica?

The Chrysler Pacifica is all-new for 2017, replacing the Town & Country as the brand's minivan. One thing that's truly new is the first-of-its-kind Pacifica Hybrid.

Which Pacifica is the Best?

Most of the extras included on the range-topping Touring-L Plus and Limited are mostly frivolities, so it's a real shame that they're the only way to get advanced safety tech and the Uconnect Theater rear-seat entertainment system. Those trims would therefore be our choices if price was no option, but as it most usually is, the Touring-L is probably the Pacifica's sweet spot.

Find a Chrysler Pacifica for sale

How Much Does a 2017 Chrysler Pacifica Cost?

The Uconnect Theater is an option on the Limited ($42,900), which nevertheless comes standard with hands-free sliding doors, bi-xenon headlamps, LED foglamps, power-folding and driver-side auto-dimming mirrors, upgraded leather upholstery and interior trim, ventilated front seats, a power-folding third row, an integrated vacuum cleaner, a panoramic sunroof over the first two rows, a fixed glass panel over the third and a navigation system integrated into the 8.4-inch Uconnect system (optional on all others). Also included are 18-in wheels and a suspension upgrade that are available on all but the LX and Touring trims.

Most of the extra equipment found on upper trim levels is not available on those below. There are some shared options, however, including the second-row middle seat that increases capacity to eight. Available on the Touring-L Plus and Limited trims is the Advanced SafetyTec Group, which adds adaptive cruise control, forward-collision warning and automatic braking, lane-keeping assistance, front and rear parking sensors, an automatic parking system, automatic wipers and automatic highbeams. The Limited alone can be optioned with the Uconnect Theater and Sound Group, which adds a 20-speaker Harman Kardon sound system to the Uconnect Theater items.

The Hybrid Premium ($42,000) is comparable to the Touring-L, albeit with the 8.4 Connect system with navigation included as standard. The only option is a DVD entertainment system with a single 10-in overhead screen, DVD player, auxiliary audio inputs and wireless headphones. Both hybrids have sliding second-row seats in place of Stow 'n Go.

The Hybrid Platinum ($45,000) is similar to the Limited, but comes standard with the Advance SafetyTec Group and Uconnect Theater equipment. There are no options.

See More
Is the 2017 Chrysler Pacifica a Safe Car?

Standard safety equipment includes stability control, antilock brakes, front-seat side airbags, front-knee airbags and full-length side-curtain airbags. A rearview camera is also included. The SafetyTec Group optional on the LX and Touring and standard on all others, includes blind-spot and rear cross-traffic warning systems and rear parking sensors that can trigger automatic braking. The Advanced SafetyTec Group is optional on the Touring-L Plus and Limited, and standard on the Hybrid Platinum, and includes forward-collision warning and automatic braking and lane keeping assistance.

The government gave the Pacifica top 5-star ratings for overall, frontal and side crash protection. The non-profit Insurance Institute for Highway Safety named it a Top Safety Pick+ for its best possible ratings in crash tests and for its frontal crash prevention system.

2017 Chrysler Pacifica vs the competition

2018 Honda Odyssey -- If you're only going to consider one other minivan, make sure it's Honda's completely redesigned Odyssey. It has its own bag of family-friendly minivan tricks, along with an improved interior and technology.

2017 Kia Sedona -- The Sedona was one of our must drive vehicles of 2016. Like the Pacifica, it helps you forget you're driving a minivan, while delivering excellent value for your money and a superior warranty.

2017 Toyota Sienna -- The Sienna is getting on in years and definitely can't match all of the state-of-the-art feature content available on the Pacifica's upper trims. However, it compares favorably to lower trim levels, and still boasts a comfortable interior, Toyota's superior reliability and in its SE trim level, a sharper driving experience.

Read 2017 Chrysler Pacifica vs 2017 Toyota Sienna: Which is Better?

Find Used 2017 Chrysler Pacifica Cars for Sale by City in