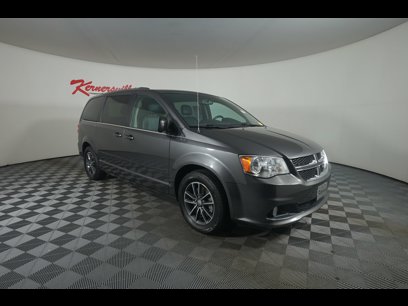 25,990
23,105 miles
See estimated payment
Dealer
Get this seller's phone number
Kick the Tires Virtually with 360 Tour
Anything catch your eye?

About the 2017 Dodge Grand Caravan

As it prepares for extinction, the Grand Caravan's trim level herd has been thinned. See the 2017 Dodge Grand Caravan models for sale near you

Which Grand Caravan is the Best?

The Dodge Grand Caravan remains a great value given its sticker price despite its age, but its new cousin, the Chrysler Pacifica is one of our favorite minivans of the last decade and is well worth the extra bucks.  If you do decide on opting for the Dodge, we suggest the SXT trim level as the perfect combination of pricing and gadgetry. Find a Dodge Grand Caravan for sale

How Much Does a 2017 Dodge Grand Caravan Cost?

The 2017 Dodge Grand Caravan comes in four trim levels: the SE, SE Plus, SXT and GT.

The SE ($25,000) comes standard with seven seats, a second-row bench seat, 17-inch steel wheels, tri-zone climate control, cloth upholstery and a 6-speaker sound system. Midway through the 2017 model year, the Grand Caravan will also come standard with a rearview camera and a 6.5-in touchscreen. We'd suggest looking for one of those. A package called the Uconnect Hands-Free Group adds must-have features like a leather-wrapped steering wheel, Bluetooth, satellite radio and a USB port. Power rear windows are optional.

The SE Plus ($27,700) adds all the above options plus 17-in alloy wheels, rear privacy glass, nicer cloth upholstery and Dodge's Stow 'n Go captain's chairs that fold into the floor.

Those items are included on the Grand Caravan GT ($33,400), which also adds sportier wheels and suspension tuning, different exterior trim, full leather upholstery, a power passenger seat, a 9-speaker sound system and, at least until midway through the year, a rearview camera and 6.5-in touchscreen interface. A navigation system will be standard midway through the model year. Only the GT can be optioned with the Safety Sphere Group, which includes blind spot monitoring and rear cross-traffic warning systems.

All trims can be equipped with a rear seat entertainment system that includes a single overhead screen, a DVD player, an HDMI input, an extra USB port, satellite radio and wireless headphones.

See More
Is the 2017 Dodge Grand Caravan a Safe Car?

In crash testing performed by the National Highway Traffic Safety Administration, the Grand Caravan received an overall rating of four stars out of five, including four stars for frontal impacts, five stars for side impacts and four stars in the rollover test.

In tests conducted by the nonprofit Insurance Institute for Highway Safety, the Grand Caravan earned strong scores in four of the group's five tests -- though it received a troubling Poor rating in the firm's challenging small-overlap front crash test.

2017 Dodge Grand Caravan vs the competition

2017 Chrysler Pacifica -- The Grand Caravan's newest competitor is just across the showroom wearing a Chrysler badge. It has all the latest safety features and high-tech gadgets, though it'll be more expensive. It's probably worth it.

2017 Honda Odyssey -- The Odyssey boasts comfy accommodations and an impressive technology suite, including an optional vacuum in the rear cargo area. But the Odyssey suffers from dull dynamics and styling that some will find questionable.

2017 Kia Sedona -- The Sedona touts handsome styling, a lot of equipment for the money and an impressive array of features and gadgets. It also comes with Kia's excellent 10-year powertrain warranty. Realistically, it's the smarter budget buy.