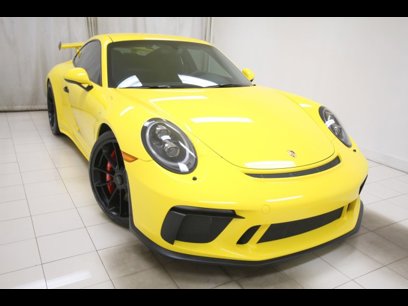 Three new models join a 911 lineup already bursting at the seams. The 911 Carrera T is aimed at enthusiasts who want less weight and more performance, while the GT3 Touring is a modified GT3 offered only with a manual transmission. Lastly, the new flagship for the 911 fleet is the 700-horsepower GT2 RS. A new Performance pack is offered for the S model that, among other improvements, bumps up output by 30 hp. Lastly, the entire suite of Porsche Connect services is now being offered on all models. See the 2018 Porsche 911 models for sale near you

The sweet spot is the 911 Carrera S Cabriolet. With its 420 hp, legitimately premium interior and open-air experience, it's sure to give you a rush when you gun the accelerator, as well as delivering a generally pleasant ride for longer trips. The only consideration here is price, because with a starting price of around $118,000 and options that can push it well over $130,000, there are several interesting alternatives available. For the Porsche faithful, it's a slam dunk.

Find a Porsche 911 for sale

Most of the differences among the models reside in their performance, as opposed to their standard and optional equipment. Porsche provides an almost unlimited number of customization options, and many of them add tens of thousands of dollars to the bottom line.

Many of the standard features on the upper trims are optional on the lower ones. Porsche 911 options include ceramic-composite brakes, a carbon-fiber interior, an upgraded leather interior and dashboard, vent surrounds and door panels, adaptive cruise control, active suspension management, a heated steering wheel, adaptive sport bucket seats with natural leather, heated and ventilated front seats, a power moonroof (glass) or sunroof (metal), the upgraded Sport Chrono package and more.

With its nearly useless back seat, the safety features in the 911 focus on the driver and front-seat passenger. Both passengers have full-size head, knee and side airbags, as well as side-curtain airbags.

Neither the Insurance Institute for Highway Safety nor the federal government has crash-tested the 2018 Porsche 911.

2018 Chevrolet Corvette Z06 -- The 650-horsepower Z06 delivers more muscle than the most powerful 911 and more thrills than base models, and does so for a lot less money. It's a performance bargain.