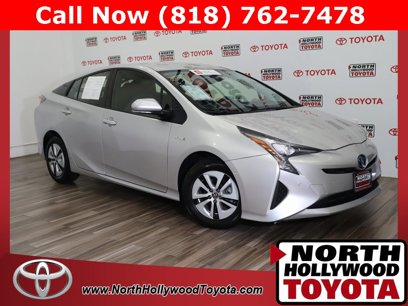 About the 2018 Toyota Prius

There were no changes made for the 2018 Prius. See the 2018 Toyota Prius models for sale near you

Which Prius is the Best?

Stick with a base Prius Two. There's no shortage of features (including accident avoidance tech), and since no Prius can be had with leather upholstery, it's not like upper trim levels are that much more luxurious. Paying more also puts you squarely in the territory of the new Camry Hybrid, which in its well-stocked LE base trim gets the same fuel economy as the Prius, but with a great many advantages. Find a Toyota Prius for sale

In many markets, the Prius Two ($24,700) will actually be the base trim. It only adds a rear wiper and seat-back pockets.

Next up is the Prius Three ($26,700), which adds automatic headlights, a wireless-device charging pad, a steering wheel wrapped in SofTex vinyl (a leather-wrapped wheel is not available), satellite radio and Toyota's Entune infotainment system with a 7-in screen, a navigation system and app functionality. The rear wiper makes a reappearance.

Opting for the Three Touring ($28,100) or the Four Touring ($30,600) includes everything from its corresponding numbered trim level plus 17-in alloy wheels, fog lights, LED accent lighting, some styling flourishes, and if not already specified, SofTex upholstery.

The Prius comes standard with an impressive list of safety features. Besides the usual array of antilock brakes, stability and traction control, front-side airbags and full-length side curtain airbags, it also includes a driver knee airbag, a passenger seat cushion airbag, forward-collision warning and automatic braking and lane-departure warning and intervention. Blind spot and rear cross-traffic warning systems are standard on the Four and Four Touring.

In government crash tests, the Prius received five stars for overall crash safety plus four stars for frontal protection and five stars for side protection. The nonprofit Insurance Institute for Highway Safety named the Prius a Top Safety Pick for its high scores in all relevant tests.

2018 Toyota Prius vs the competition

2018 Hyundai Ioniq Hybrid -- The Prius may finally have a worthy competitor. The impressive new Ioniq offers superior fuel economy than the Prius at a lower price, while also boasting a more involving (and almost fun) driving experience and less funky, more functional cabin design. The Ioniq is also available in plug-in and electric variants.

2018 Toyota Camry Hybrid LE -- The base Camry Hybrid gets the same 52-mpg combined rating as most Prius trim models. That's despite being more powerful, spacious, luxurious and generally more refined. It's priced just a little more than the Prius Three. Could be worth it.

2018 Chevrolet Bolt -- How'd you like to spend $0 at the pump? Well, that's the promise of the Chevy Bolt, the first reasonably-priced electric car that eases range anxiety by topping 200 miles of range.

Used Honda Accord Hybrid -- The previous-generation Honda Accord Hybrid boasts an impressive 50 mpg city/45 mpg hwy, along with a roomy cabin and more traditional styling. New models are more expensive than the Prius, so you may have to check out a used version.

Looking for a Used Toyota Prius?

The Toyota Prius continues to be a great pick for anyone who needs a mid-sized car but wants fantastic fuel mileage. The Prius C gets a few mild updates and cars now include Toyota's Safety Sense C, and a backup camera as standard equipment. With the largest selection of cars from dealers and private sellers, Autotrader can help find the perfect Prius for you.

Not sure if a Prius is the right fit for you?

That's okay! We make it easy to shop for your next vehicle by body type, mileage, price, and much more.You can find other popular Toyota vehicles such as Tacoma, Tundra, and Highlander on Autotrader.

Find Used 2018 Toyota Prius Cars for Sale by City in