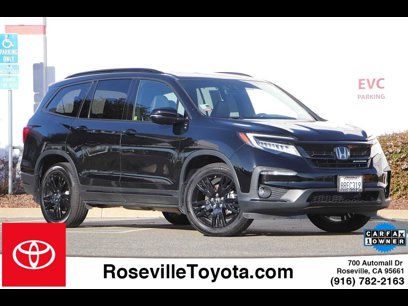 The Pilot gains a new Black Edition for 2020, which is exactly what it sounds like. It adds black exterior trim, 20-in black alloy wheels, red ambient interior lighting, and red seat stitching to the range-topping Elite trim. See the 2020 Honda Pilot models for sale near you

Which Pilot is the Best?

Very few people choose the base Pilot LX, and it's easy to see why: the EX adds a massive amount of desirable equipment for a reasonable $3,000 more. Besides the EX-L's leather upholstery, there are few features in the upper trims that would be difficult to live without. The Elite and Black Edition trims, in particular, seem like questionable values given their price jump and feature content beyond the Touring. Find a Honda Pilot for sale

Going up to the Touring ($42,620) adds the 9-speed automatic transmission, 20-in wheels, roof rails, LED headlights, parking sensors, extra sound deadening, a 10-speaker sound system, in-car Wi-Fi, the integrated navigation and all the RES features. Heated second-row captain's chairs can be added as an option in place of the standard second-row bench seat. Seating capacity is reduced to seven.

Opt for the top-of-the-line Elite ($48,120) and you'll get LED headlights, auto-dimming and power-folding mirrors, automatic wipers, a panoramic sunroof, heated and ventilated front seats, the second-row captain's chairs, a heated steering wheel and a wireless smartphone charging pad. Unlike all the other trims, it only comes with AWD.

Finally, there's the Black Edition ($49,620) which is all-new for 2020. Similar to the Honda Ridgeline Black Edition, this is little more than an appearance package for the Pilot Elite. Basically, everything that is chrome on the Elite is black on the Black Edition including a gloss black grille and 20-inch black alloy wheels. On the inside, there's red ambient lighting and a special leather interior with two-tone black and dark red seats with red stitching.

In government crash testing, the 2020 Honda Pilot received a 5-star overall rating plus 4-star frontal and 5-star side ratings. The nonprofit Insurance Institute for Highway Safety awarded the Pilot its Top Safety Pick award. It got the best possible rating of Good in most crashworthiness categories (minus the new passenger-side small overlap test, where it got an Acceptable rating) and a Superior accident avoidance tech rating. Its headlights were given a rating of Acceptable.

2020 Honda Pilot vs the competition

2020 Subaru Ascent -- Imagine building a Honda Pilot with Subaru Outback parts, and that's pretty much what you'll get with the all-new Ascent. Subaru's 3-row crossover is very similar to the Pilot in overall concept, but there's a chance you might prefer Subaru's take (plus its extra space) -- so make sure to check it out.

2020 Chevrolet Traverse -- Want the most space possible, but refuse to go the minivan route? Well, the Traverse is the biggest kid on the playground. It's absolutely enormous inside for people and cargo, besting even the Pilot and the Ascent. It also impresses on the technology front.

2020 Mazda CX-9 -- On the opposite end of the spectrum, the CX-9 is the way to go if you want to forget you're driving a huge family vehicle. It's the athlete of the segment, and although it can't match the Pilot's space, the Mazda's classy interior, efficient engine and relatively fun-to-drive nature should impress.

Used Acura MDX -- If you like what you see here, you might want to consider a used Acura MDX. Think of it as a luxury version of the Pilot, with high-end features, equipment, gadgets and materials. It's also available as a hybrid.

Looking for a Used Honda Pilot ?

The Honda Pilot features three rows of seating worthy of a minivan, yet it also incorporates the ruggedness of traditional SUVs. A host of safety features is available, and it features a powerful engine and reasonable fuel economy thanks to an available 9-speed transmission. With the largest selection of cars from dealers and private sellers, Autotrader can help find the perfect Pilot for you.

Find Used 2020 Honda Pilot Cars for Sale by City in